Home > Health & Wellness > What are the risks of Dupuytren’s Contracture, and Why does it occur? 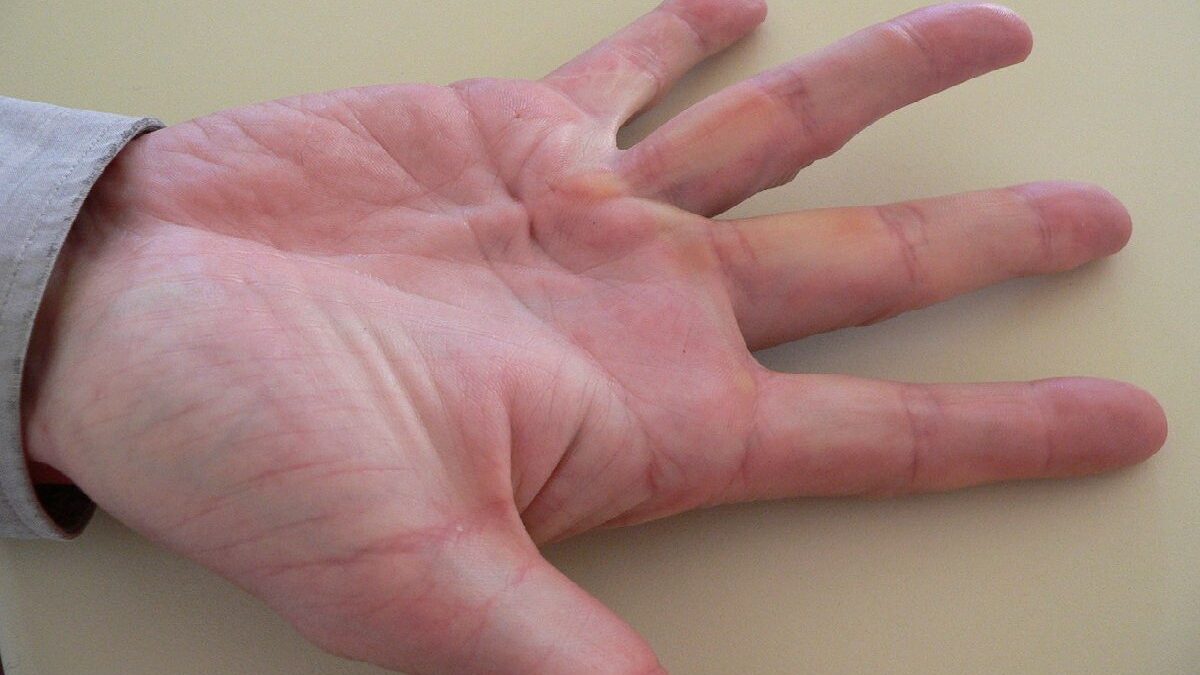 What are the risks of Dupuytren’s Contracture, and Why does it occur?

Dupuytren’s Contracture, also known as Dupuytren’s disease or Vikings disease, is a condition that affects the hand and fingers. The condition starts out as a nodule in the palm of the hand, and gradually the fingers will then bend in unnaturally, making movements extremely difficult. The condition occurs in people of Northern European descent most often, hence the name Vikings disease. As the Vikings traveled throughout Northern Europe, they spread the condition amongst the natives. It has been proven that Dupuytren’s is hereditary and passed down from generation to generation. There is, however, no confirmed cause of Dupuytren’s Contracture other than it is connected to a chemical imbalance in the body that triggers the symptoms. The condition is more often found in people who drink a lot of alcohol and smoke more than 25 cigarettes a day. It is also very prevalent in those who have diabetes; this may be due to decreased blood supply to the hand. Gender is also a huge player who will suffer from Dupuytren’s disease, with men being more likely to do so than women. You will also find the condition in those 50 years or older.

If left untreated, Dupuytren’s disease will not heal itself and can leave the hand and fingers unusable. It usually starts in the ring and middle finger and can then spread if not treated. Although not known to be a painful condition, it can become painful due to the unnatural bending of the fingers that are being affected. The condition is known to make life extremely difficult as the movement of the fingers is not possible.

The treatments for Dupuytren’s disease and their potential risks

Dupuytren’s Contracture is one of the diseases that, unfortunately, doesn’t have a cure. Surgery is usually the most common treatment for Dupuytren’s disease, and there are a few risks associated with it. During the surgery, the surgeon must be extremely cautious as one mistake can be catastrophic. Nerve damage can occur if the surgeon accidentally hits one during the operation. Several tendons and arteries are in the area and could potentially be at risk. There are also several flare-ups to the wound and other complications with the area affected by surgery. Another downside to an operation for Dupuytren’s disease is the scar. When making the incision, the surgeon has to do a zigzag incision often, leaving an ugly looking scar after recovery. Recovery time from the surgery can be 4 to 6 months, followed by 12 or more physiotherapy weeks.

Needle aponeurotomy is another treatment that is often used for Dupuytren’s disease. Unlike surgery, needle aponeurotomy will not leave an unsightly scar and is usually far less painful. However, after this form of treatment, you may experience tingling or numbness in the treated area. In some cases, nerve and tendon irritation occurs when you have this procedure done. There is also a chance of bleeding at the Contracture site, which can lead to infection as the wound is left open. The recovery period for needle aponeurotomy can be anywhere from 2 to 4 weeks, followed by 6 to 12 weeks of physiotherapy.

An enzyme injection is often used to soften the tissue, and this will allow the fingers to be manipulated back into a straightened position. The fingers are straightened by the cord being broken in the hand. This injection has some side effects, including bleeding at the site of the injection and swelling and bruising. This non-surgical treatment for Dupuytren’s Contracture is often avoided because it can cause swelling in the lymph nodes.

Doctors will often recommend a splint or brace to treat Dupuytren’s Contracture. They are used to straighten out the finger in a more natural position to encourage natural healing. The splint or brace is meant to allow better blood flow to the finger. The problem is they are incredibly cumbersome and make using the hand or fingers challenging. Not only do they get in the way when attempting to do many daily tasks, but they are also known to cause aching in hand and fingers. Splints and braces are not guaranteed to repair the damage done by Dupuytren’s disease or to relieve any of the symptoms.

When Should You Start Taking Birth Control to Make It the Most Effective?

Surrogacy | How to Become a Parent If You are Infertile (Health Problems)?

Medical Aid – A Perfect Solution For Your Medical Needs