Why is Organic Food so Much Better for Our Health? 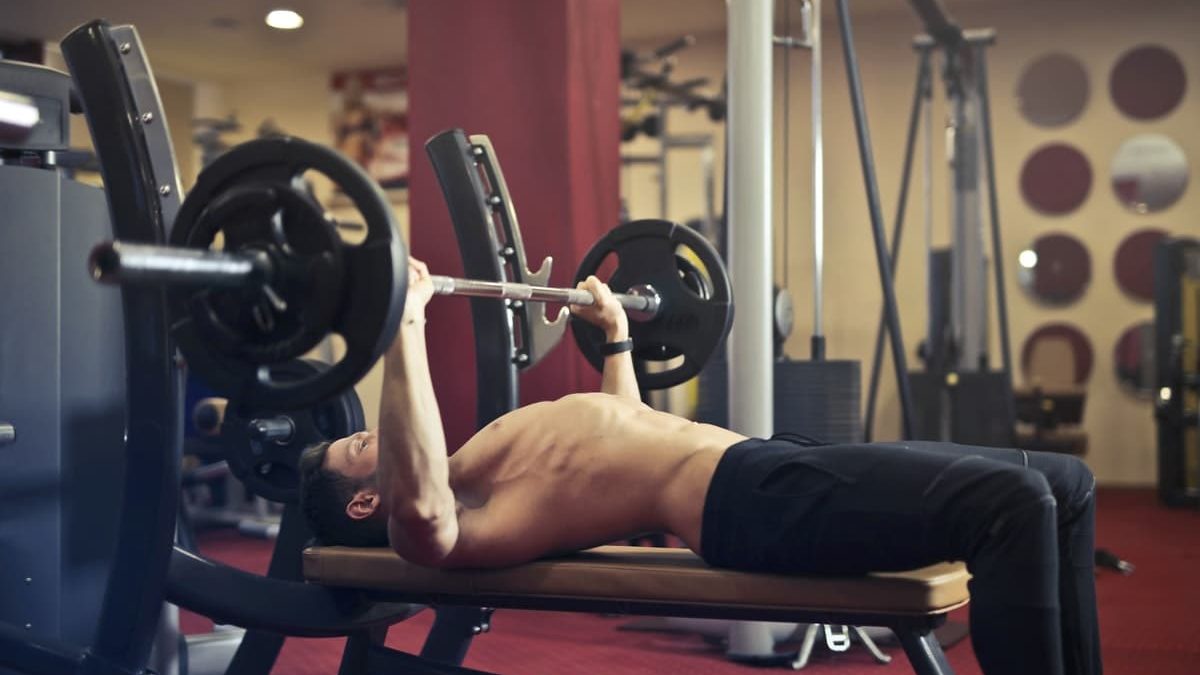 Discover the best chest workouts for a big and strong chest.

How to strengthen your chest with incredible results in a short time!

Without a doubt, the chest is one of our obsessions. It’s one of the most popular muscles in gyms, and we like to take advantage of every exercise we do to get the most out of it.

What is the most effective chest exercises? How can we enhance the upper or lower chest? How can we strengthen it while we make it bigger?

In this article from Health2Wellness Blog, we will try to answer all these questions by reviewing the best chest workouts: discover how to train the chest with this fantastic base.

When you master these movements, you can make variations and combine them.

Usually, we will use a lot of weight and look for heavy repetitions. If you are a beginner or recently that you are in a gym or exercising at home, you gain weight little by little and heat up well to avoid the risk of injury.

Now, put on your gloves, and we start!

We are going to use dumbbells, bars, pulleys and multipower

On a flat bench

For your first training, always use the Multipower. It is an exercise that requires experience if you use the open bar, to move large weights and to be challenging to maintain a good balance.

In your first steps, I recommend the position with feet on the floor, for more ease, but once you master the exercise is better the feet in the bank because you avoid excessive use of the back, which is dangerous when moving large weights.

The bar should not bounce in the chest workouts, but at the most touch it and immediately start the upward movement.

The hands separated something more than the width of your shoulders, but not excessively separated, because you would significantly reduce the amplitude of the movement and the wrists would support more stress.

The closer the hands, the more the central part of the pectorals is implied, and the more separated, the more involved the external part.

As usual, the movement must be more explosive on the rise and slower and controlled on the downside.

Large weights move because, in addition to the chest, the triceps and the anterior deltoids are very involved.

This exercise can be performed both in the inclined bench with a free bar and in multi-power.

This variant involves mainly the upper part of the chest, and as in the flat bench, triceps and deltoids are very involved.

The hand position is equal to that of a flat bench, but the bar rests on the upper part of the chest, not the central one.

Move large weights, but lower than the flat bench, for being a more “partial” exercise in that it involves more part of the chest, instead of the whole muscle group, as in the case of the flat bench.

If you do the exercise with an open bar (I do not recommend it at the beginning) always do it with a partner or with the monitor. It is very easy to lose the balance of the bar if you are not very used to it. 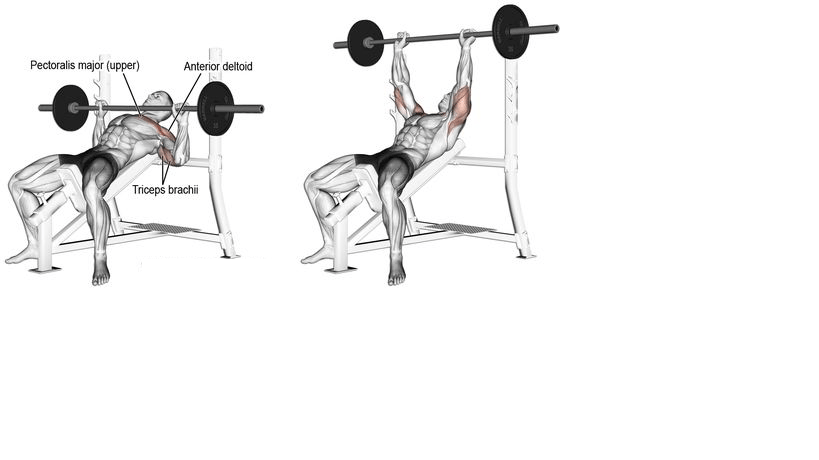 Press sitting on the machine

The back is straight and in contact with the back of the bench. Hand and arm in the same position as if the bench press bar were treated.

It has the same virtues and the same muscular implications as the flat bar bench press. Thus, it’s not an exercise complementary to that during training, but an alternative. 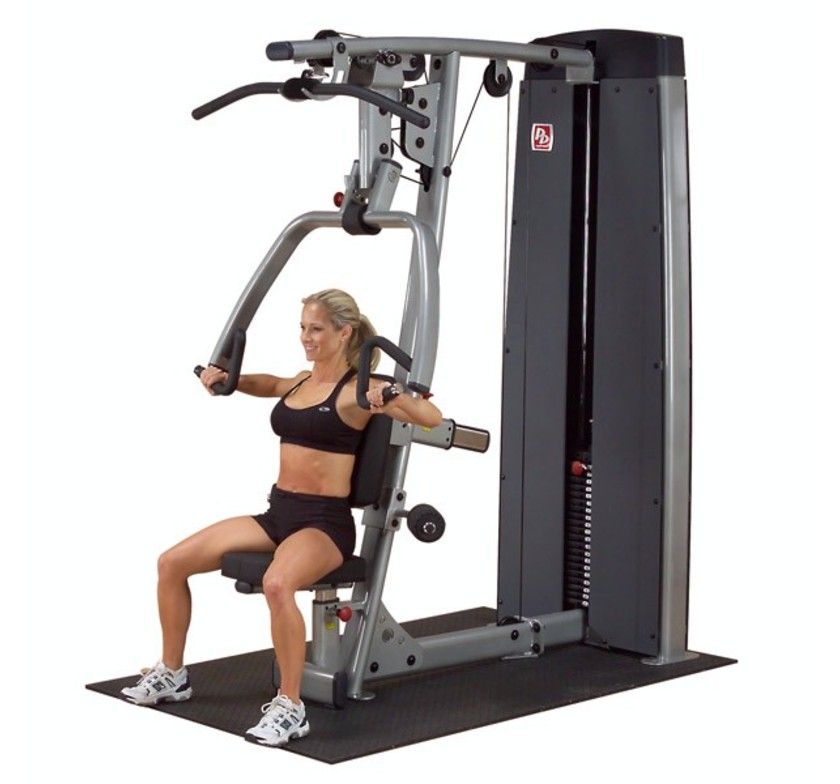 Press with dumbbells on the bench

On a flat bench

The back straight, the head resting on the bench, legs open and feet are resting on the floor for stability. The movement begins with the arms extended and the dumbbells touching each other through the internal discs.

Slowly descend and lower until you feel the tension of the chest. Then climb more explosively to the starting position.

Control the descent, not allowing the dumbbells to descend excessively and force your shoulders, and keep the forearms perpendicular to the ground.

As you can see, it is an exercise that is very similar to the press with a flat bench, but which allows you the greater amplitude of movement and starts with your hands almost together.

As with the bench inclined bar press, this variant favors the training of the upper part of the chest and is executed almost identically.

It moves a little less weight than on the flat bench.

Dumbbell openings on the bench

Body position identical to bench press with dumbbells, straight back, legs apart and feet on the floor for stability.

The movement begins with the arms extended, the grip with the palms facing each other and the dumbbells touching the two discs (parallel).

The descent is made with the arms in slight flexion and until the dumbbells are at the height of your shoulders (never lower).

This exercise requires the use of relatively low weights, due to the enormous tension it produces in the pectorals and deltoids, and it is especially important to control the execution at all times, without any explosiveness and at a slow pace.

It’s an essential exercise, which favors the chest expansion and the stretching of the pectorals.

Perform 8 to 10 repetitions per series and remember that it is not necessary to use large weights, especially in the first months of training.

With the push of hands

It reproduces in the sitting position the same movement as lying down, and the principles of execution are the same.

Therefore, keep your hands at shoulder height and perform the movement in a controlled and slow manner, both in the opening and closing. 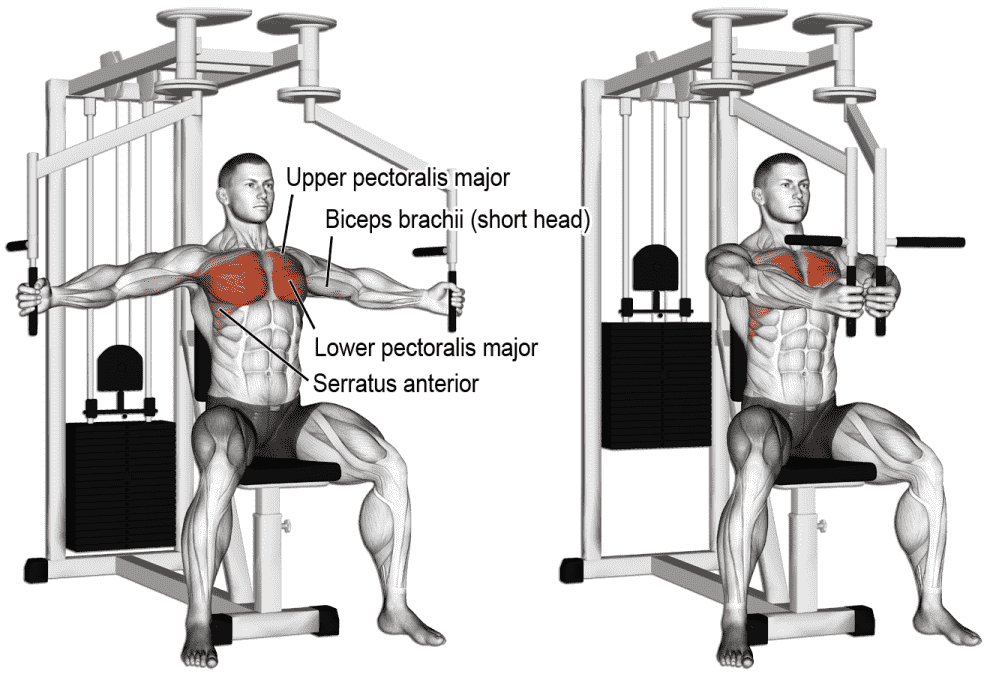 The elbows at the height of the shoulders and forearms perpendicular to the floor.

Keep your head resting on the backrest (avoiding stress on the back) and make the closing movement to the maximum. The wrists relaxed, the push centered on forearms and elbows.

The body inclined forward, the front view and the legs in scissors and slightly flexed. The arms without stretching at all, similar to the openings on the bench.

It requires rhythm and absolute control of the movement to maintain the same tension in the two arms (and therefore in the two pectoral muscles) and total stability of the body.

Adjust your trunk and leg posture to achieve this stability.

Cross your hands alternately in each repetition, that is, first make the crossing with the right hand over the left and then the other way around.

At the moment of crossing, stop for a moment the position and “feel” like the inside of the pectorals (the one closest to the sternum) is tensed.

It is a very effective exercise, which well done brings great congestion to the pectorals. Don’t look to move large weights, but average weights and around 10 repetitions per series.

The postural and movement bases of the high pulley are applicable to the low pulley version: trunk inclined forward, scissor legs slightly flexed and stability and movement control.

The movement from the bottom up also favors great congestion of the chest, which, as in the high pulley variant, requires stopping for a moment when crossing the hands to feel all the muscular contraction.

Do you want to do it at home?

If you want to do chest workouts at home, you can also choose those of chest with the dumbbell.

Best Exercises For A Complete Back Workout

5 Bathroom Supporting Equipment For Elderly to Avoid Fall and Trips

How To Tell If A Tummy Tuck Is Right For You

What are Varicose Veins

Why is Organic Food so Much Better for Our Health?