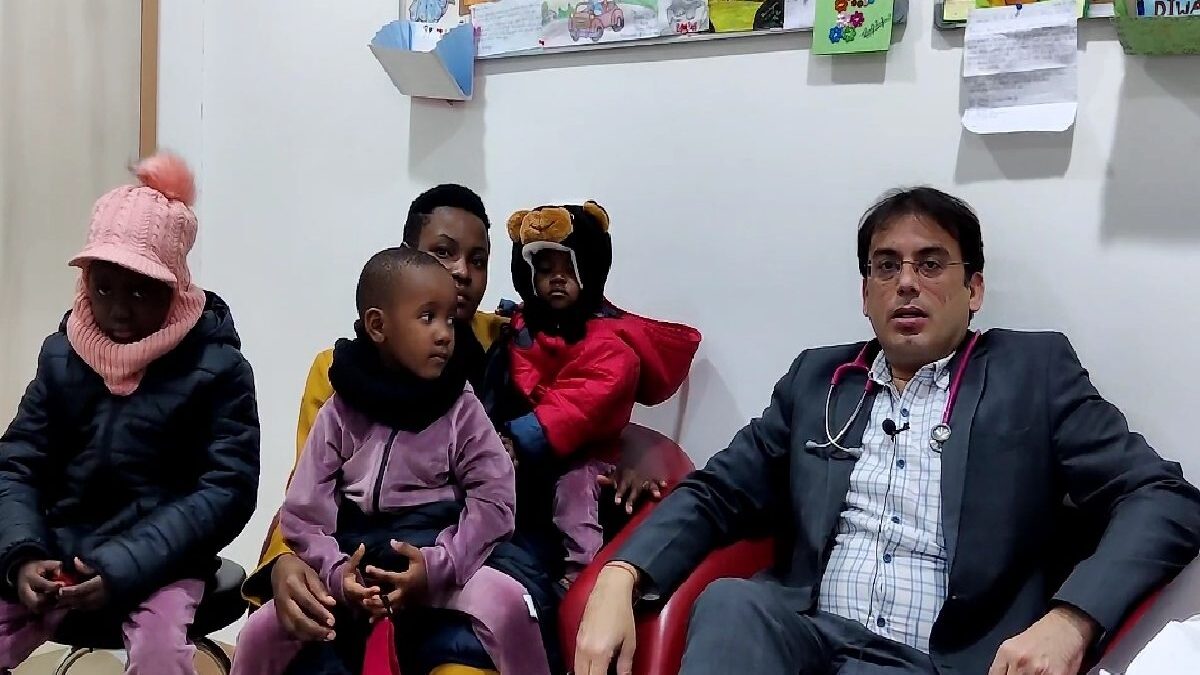 Glory Enzi was diagnosed with Sickle Cell Anemia shortly after birth. Her parents would bring her to the emergency rooms whenever she got a fever throughout the first few years of her life. Her parents could not envision a life of continuous worry and uncertainty, even though she had never been admitted to a hospital.

When 7-year-old Glory was born, her platelet count was low. The findings of two tests for sickle cell disease were inconclusive, but a third test verified the diagnosis. She began seeing a hematologist every three months in Dar es Salaam city in Tanzania, where the family was living at the time.

Glory’s mother, stela, adds, A college friend’s son had sickle cell, so I had heard from my friend about the treatment for sickle cell anemia.

“When I told the hematologist about it, he said it’s only done if you have a lot of pain crises.” Because it was 2016 at the time, the operation was probably not prevalent in Tanzania.” The family focused on understanding how to manage Glory’s sickle cell condition once they realized it was a fact.

Red blood cells in patients with the condition do not create enough hemoglobin, the protein that transports oxygen throughout the body, and the red blood cells become hard and malformed. Those who have the disease may experience pain, infections, organ damage, and, in some cases, early death.

Every time Glory had to go to the emergency department if she had a fever to make sure she didn’t have a life-threatening infection. Because sickle-shaped red blood cells damage the spleen, which helps filter bacteria out of the blood, people with sickle cell disease, especially children, are at risk for deadly bacterial infections. Fortunately, Glory’s fevers were caused by something ordinary, such as a cold. “I was grateful that she never needed to be hospitalized,” Stela adds. However, the family was concerned that Glory would have a big health scare at some point.

After a few years, when she was around 5 years old and suffering from tremendous pain in her stomach and legs, we gave her medications, but she didn’t respond to them. Her health and discomfort began to worsen. We rushed her to the hospital for a check-up, and our doctor later informed us that Glory is presently experiencing a sickle crisis, which could reoccur at any time. We enquired about a treatment, but they informed us that there are no therapeutic options accessible.

Glory settled down and returned home after a few days, and we all realized that the treatment provided by the local doctors was ineffective, and her situation could worsen in the future. We made the decision to look for a concrete potential treatment approach. So, while looking online, we came across the medical assistance channel “MedSurgeIndia” from a patient’s story who successfully underwent sickle cell anemia treatment with bone marrow transplantation, commonly known as Stem Cell Transplantation, under the supervision of Dr. Vikas Dua of India and we find out Bone Marrow Transplant success rate in India is very high. We later looked up additional information on the doctor mentioned on the Medsurge website and discovered that he specializes in treating pediatric Sickle Cell Anemia victims and has performed over 400 bone marrow transplants successfully.

The video and doctor’s biography encouraged us with optimism and faith, prompting us to address him with a query along with all recent medical records, to which we received a quick comprehensive response from the MedsurgeIndia website. The online team has arranged an immediate video consultation with the doctor.

There, he informed us that in order to find a suitable donor among us, we would need to conduct a Human Leukocyte Antigen (HLA) test on the patient, sibling, and parents. Then the doctor and MedsurgeIndia team sent us HLA kits and instructed us to take samples ourselves using the swabs given in the package. The samples were then submitted to the certified research lab for testing, and the outcome was – we were fortunate that Glory was a full match with the younger sibling Giana Enzi. We enquired not only about the treatment method, but also about the hospital facilities, assistance, and services that Medsurge and his staff would provide to us in India.

We ultimately chose to travel to India for our daughter’s bone marrow transplant after much communication and deliberation. When we arrived in India, the MedsurgeIndia crew took us from the airport to our guesthouse in comfort. We were both delighted and worried about meeting Dr. Vikas Dua since we were still nervous about the transplantation. To be honest, none of us were able to get a good night’s sleep that night because we were all worried about the treatment, healing, and other aspects of our extended stay. The next day, we met the whole team of MedsurgeIndia, who described everything in better detail. I recall him telling us that your child will get better from here on, that God had sent you here, and that we should relax. The doctor’s final line inspired in us a great deal of confidence in our ability to proceed with the treatment.

After both daughters, Glory, and the matching sibling donor, went through a series of pre-evaluation testing, stem cells were collected from her, which is a very safe and modest process similar to blood donation. Glory was next given chemotherapy to eliminate her sickle cells, followed by a bone marrow transplant in which healthy stem cells were extracted and infused into her blood. After a few days, her new healthy stem cells began to proliferate. Throughout the course of treatment, I prayed. We praise God that the procedure went smoothly, despite the fact that there were numerous ups and downs, which we were aware of because the doctor informed us of them at each stage.

We were released from the hospital after a month, and we stayed near the hospital for another two months because we were instructed to attend weekly checkups and follow-up testing.

The complete team of MedsurgeIndia with hospital staff was quite helpful in establishing faith in us throughout our journey; our daughter has now become extremely thin, her immunity has significantly decreased, but she is gradually returning to normal. During this time, we learned a great deal about life.

After a long and rewarding wait, our final departure from India arrived, and we were all quite excited, particularly the children who were missing their home and family. We were overjoyed that our daughters were gradually becoming healthier. The doctor advised us to keep in touch with him via WhatsApp and to submit all relevant information and medical reports with him on a regular basis. We flew out of India and landed in Tanzania in comfort with the help of the Medsurge family. Dr. Vikas and his staff did a fantastic job! …as a result of their assistance, our daughter is now able to live a normal life and participate in all activities.

Stela added “Thank you for your medical services and assistance, Medsurge India. My daughter can only have a healthy life as a result of your efforts.” 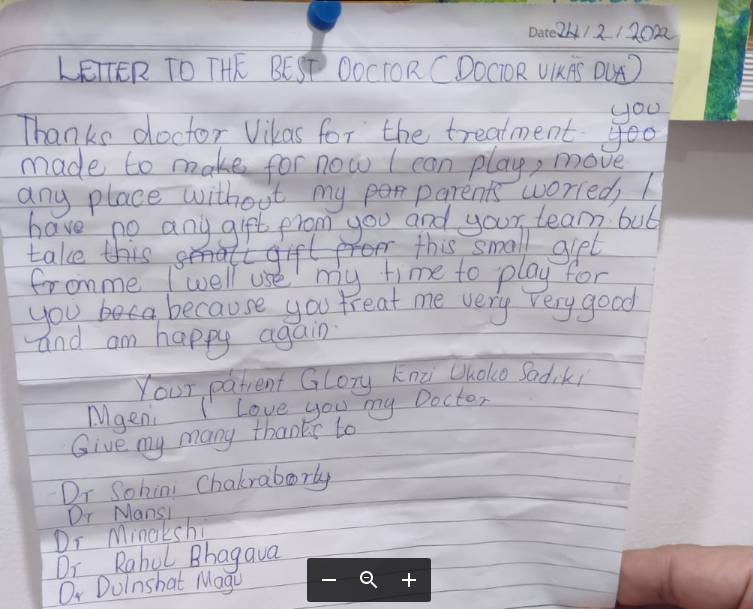 Little Glory “ Thank you MedSurge Team and Dr. Vikas for this beautiful Gift. You are an angel for me.”

Q: What drew your attention to Fortis’s care?

A: “Fortis gave me a sense of safety,” Stela adds. “They knew all there was to know about everything.” They were able to respond to every query we had, and while there were no guarantees, they always told us the truth, good or bad. I felt comfortable committing my daughter’s life to them.”

Q: Was deciding to have a Bone Marrow Transplant a difficult decision?

A: “My husband and I debated whether or not to do it,” Stela explains. “However, our persistent worry of something horrible happening one day, as well as our faith in God, helped us make the decision to see it through.” We wanted to give Glory the chance to live her life without fear. My college friend’s mother died of sickle cell anemia problems. She had to go through a lot, and I didn’t want it for my kid’s well-being. When I did online research and found support groups to read about other people’s experiences, it also helped. I sent two moms a message to seek their thoughts.”

Q: What is the most common side effect Glory experienced following her bone marrow transplant?

A: infections are the most common, as Dr.Vikas indicated. Later infections such as viral, fungal, and other diseases can emerge as a result of the treatment. Later, weeks to months following the transplant, Glory began to suffer bacterial infections. However, it was instantly treated by the doctor’s prescription and a list of preventative measures that he provided. Infections can lengthen hospital stays, block or delay engraftment, damage organs, and even result in death.

Q: How is the HLA test done?

A: A needle is inserted into a vein in your arm to get a blood sample. A buccal swab (a swab of cells collected from the inside of your cheek) is sometimes used for testing. Neither approach necessitates any particular preparation.

How to Choose a Personal Fitness Trainer For a Positive Experience

5 Tips To Come Up With A Skin Care Routine

The enigma of Autism – An Executive dysfunction

A Smoker’s Guide to Vaping

What Every Woman Should Know About Pelvic Floor Health